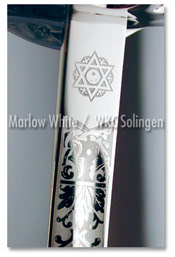 We cannot absolutely confirm the history of the star; however, we do know that the blade specifications for both the U.S. and British military swords require the six-pointed star with the word "Proved" etched on the blade.

As best we can tell, the specification for the six-pointed star is historical in nature and was likely used to signify that the blade was manufactured using the Damascus steel method. Today, there is no requirement for Damascus steel blades; however, the six-pointed "Proved" star is required in the etch to signify that the blade meets the current military specifications. Even this use has lost its meaning, however, since replica swords intended only for wall-mounting incorrectly bear the symbol.

Damascus steel was perfected by the Persians and was reportedly encountered by Alexander the Great three centuries before Christ. The Persians used the six-pointed star during these non-modern times. The Persian blade-making process of folding the steel many times - even hundreds of times - to layer the steel resulted in extremely tough blades with both strength and resilience. The term "Damascus steel" came from western traders first encountering the steel in Damascus.