What is Intercept® Lining? 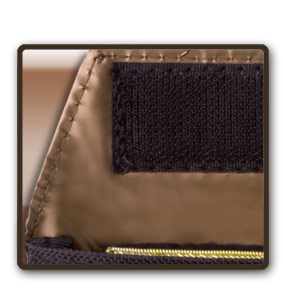 Detail of the Intercept lining
of our shoulder strap case.

Intercept film is a revolutionary material developed and patented by Lucent Technologies to provide protection against corrosion, rust and mildew. Unlike other barrier technologies, Intercept films are environmentally friendly, completely recyclable, and do not release any hazardous gases. Intercept film will not leave any type of residue on the object being protected. Chamber tests on this film indicate a 25-year protective life span. How do you know when the Intercept film is no longer effective? Lucent has designed the film so that the color will change (from copper to gray) when its life span has expired.

What is it used for, and how would it benefit me?

Intercept film has many uses. Almost anything that can rust or tarnish (swords, insignia, jewelry, weapons) is protected by enclosing it in Intercept film. Even fabrics (such as military uniforms) are protected by Intercept's unique capabilities.

The following are just some of the uses for an Intercept-lined storage container:

Our Intercept-Lined pouches and cases will fit a variety of the above products.