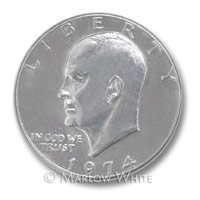 The Army Officer's Guide, considered the standard for information concerning general officer knowledge and the Army's traditions, discusses the tradition as follows:

The "Silver Dollar" Salute. It is a tradition in our Army that newly commissioned second lieutenants present a silver dollar to the first enlisted Soldier who salutes them. The coin symbolically acknowledges the receipt of respect due the new rank and position. [p. 95, "Customs of the Service," Army Officer's Guide, 45th Edition, Lt. Col. Lawrence P. Crocker, U.S. Army (Retired), (Stackpole Books, Harrisburg, 1990).]

The coin dollar of old was either the gold or silver piece of currency at the time. After our coinage changed from silver in the 60s, the coin of choice became the Eisenhower Dollar. Though out of circulation, most new lieutenants prefer the "Ike dollar" because its large size makes it so profoundly and easily identifiable as a "silver dollar."

While non-silver Ike dollars are more readily available, please recognize that a pure traditionalist would select a pure silver dollar ... available at coin shops for about $12 to $15.

Marlow White welcomes you to the traditions of the Army and wishes the best for your new career.