Marlow White has been offering finely crafted "" for quite some time. We have become aware of the alternate spellings of the word "Sabre" and decided to do some research. Here is what we have found: 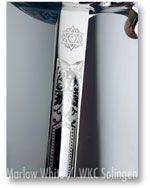 Return to the Army Saber page.