Due to the large number of web sites that are selling very inexpensive Marine Sword replicas, we thought we would review a replica sword to include next to our Marine NCO Sword Comparison. Notice that we do not include the replica sword in a direct comparison to the other non-replica swords, simply because a replica sword does not come even close to meeting the Marine Corps specifications.

This page will give you a general idea of what to expect when spending $100 or less for a replica of a Marine Sword. The old adage certainly applies to web sites that deceptively, and even falsely, represent a replica sword as an "official" sword made to an "exacting" quality: "If it sounds too good to be true, then it probably isn't true."

As you can see by the etch, the replica is definitely made in a non-European and non-English speaking country.

Our images are not retouched in any way, except as noted to remove the specific identification of the replica's source.

To jump to a section:

The replica we purchased included a tassel that was attached to the handle. This is the first indication that the manufacturer and seller do not understand Marines. Marine NCO's do not wear a sword knot (or a tassel) on their sword. While Marine Officers have a leatherlike sword knot, it does not remotely resemble the tassel attached to the replica. The good news is that the tassel could not have added much to the price of the replica. 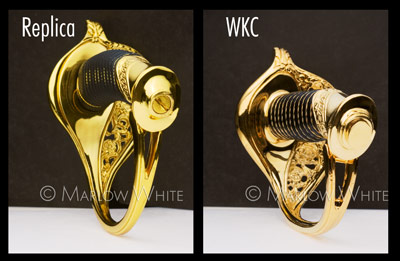 While the above pair of images is definitely an apples-to-oranges comparison, the only way to properly illustrate incorrect color is by showing proper color alongside. You will also notice the replica has a screw for an end cap instead of a nut. The hand guard is also improperly proportioned in shape and does not meet the required size specification.

There is absolutely no comparison between WKC's etched blade and the replica blade. We probably should not be surprised to see the word "United" misspelled as "Unued." The level of detail on the replica's etch is not even in the same league as a specification sword; one cannot even discern the Marine Corps emblem and the US flag. The blood groove is also cut or milled out of the blade instead of forged into the blade. 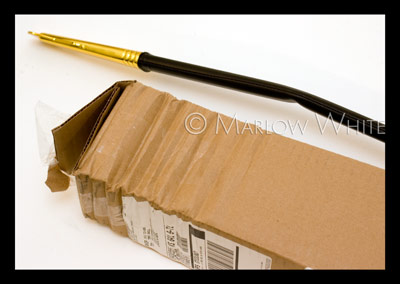 Our replica arrived damaged. While it may be easy to blame the shipping company, in this case it was as much the fault of the retail location. The cardboard's striations ran around the box and not down the length, easily allowing for the crushing that did in fact occur. We also noticed that the box did not show the return address of the web-based company from whom we ordered, but showed a shipping address that was likely an independent warehouse or a "shipping store." So our question is obvious - where do we claim our damage, to the shipping company, to the shipping store, or to the company from whom we purchased? As a note, we removed a logo from the box.

The employee who placed our order for the replica sword was surprised with a change in his e-mail account over the next few weeks. His e-mail account had averaged about 40 "spam" messages per week for a number of months prior to ordering the replica. Immediately after ordering the replica, his weekly spam increased to about 100 "spam" messages each week and has remained at that level. We cannot absolutely say that the increase in spam was directly related to the purchase of the replica; however, the increase is a very interesting and aggravating coincidence. The web site he ordered from did not display a privacy policy.